We kicked off the day with breakfast at 8:30am at the hotel. The apples were shady but hey, it’s still fruit. After breakfast, we put our bags on the bus and then had free time until 11:30am so a few of us took off back into the city.

Greg and I wanted to climb the bell tower and since it was included in the tickets to climb the Duomo yesterday, there was no line, and the weather was great, we decided to go for it. It was quite the hike but not near as high as some of the other things we’ve climbed up. The stairs were narrow and steep (and it was a single staircase up AND down) which made it all the more interesting. Luckily, there were different platforms/levels of the tower so we had a little rest and nice breeze every few floors. Justin, Victoria, Heidi, and Cassie were waiting at the bottom for us so we waved to them on our way up! We also had some great views of the city and even better views if the Duomo. 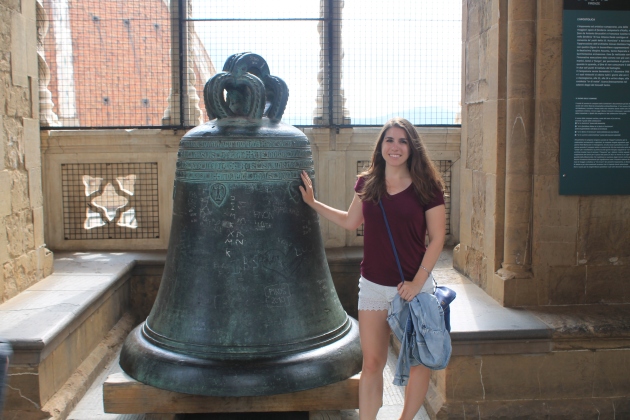 After the tower, we decided to get gelato from Venchi one last time. It really was THAT good.

We were going to be on the bus during lunch so we also stopped by Cafe Gilli (the oldest in Florence, if you recall) for take away sandwiches to eat later. We then met up with the rest of the group to go visit one last stop before heading to Rome. Antonio, our bus driver, drove us up to the Piazza Michaelangelo for a great view of the city. The rain was starting to come in but it was still nice while we were there and you could basically all of Florence from one spot. It was amazing! 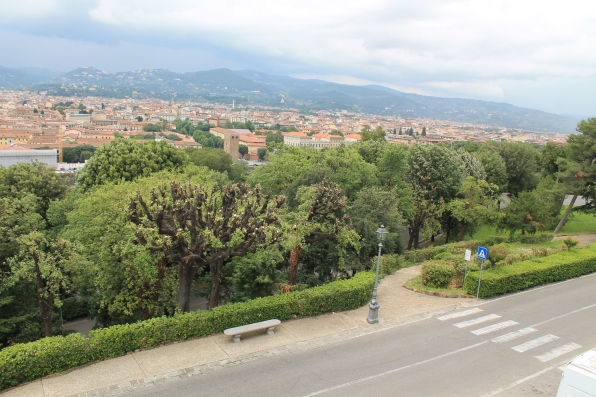 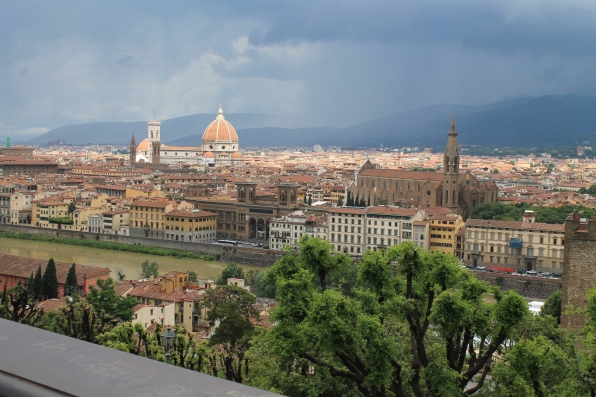 We were back on the bus and on our way to Rome by 12:15pm. I ate my sandwich and while the rest of the bus watched Gladiator, I took a nap. We stopped halfway for snacks and a bathroom break and made it to Rome a little after 4pm.

Our hotel is in a monastery so it was definitely an… interesting hotel. Our room was pretty large but very stark which made it feel cold, and I don’t mean temperature-wise. The hotel also had no Wi-Fi in the rooms, only in the lobby or designated Wi-Fi areas but surprise, the Wi-Fi was down. This made it pretty difficult to plan our day when we couldn’t look up the hours of any museum or site, couldn’t look up directions, etc. We had a map but our hotel wasn’t even on it. It was pretty stressful to be put into a city and not be able to do anything, but we made it work. 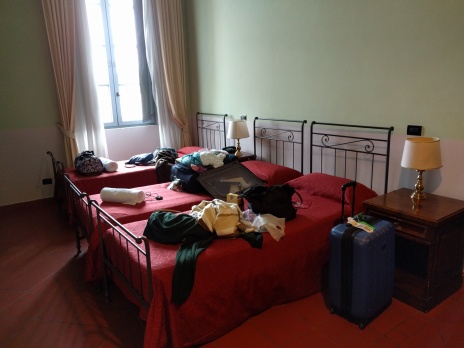 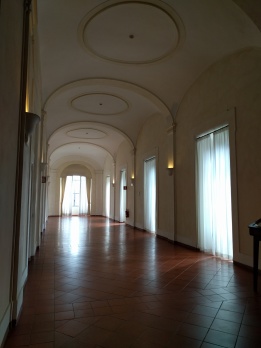 Justin had the offline map of the city downloaded so that helped get us to the Colosseum. We didn’t think it would be open because everything indicated it closed at 3:30pm but we went anyways and to our luck, it was open. We used our Roma Pass to get in and it was amazing. The weather was perfect and because it was early evening, it wasn’t too hot. We walked around inside and I took probably a million pictures, even though they all started to look the same. It was really surreal being in there! I was in a pretty foul mood up that point because of the hotel situation and because of our walk to the Colosseum (it was pretty gross; the city was not giving me good vibes) but things definitely turned around at that point. We toured everything we could and then decided we needed to go find a place to eat! 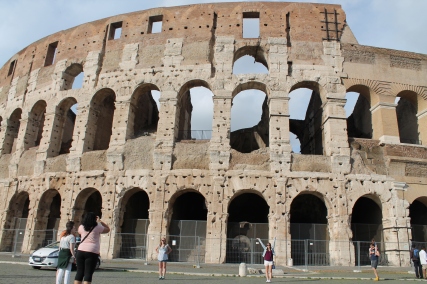 On our way to the Colosseum we passed a street celebrating Roma Pride and there were a ton of pizza places so we started to head that way but then decided it would be crowded so we went exploring for another place. We found a pretty decent cafe nearby and finally had some good Italian pizza! We also tried the bruschetta (really delicious) and got a few desserts (the churros and chocolate were amazing). 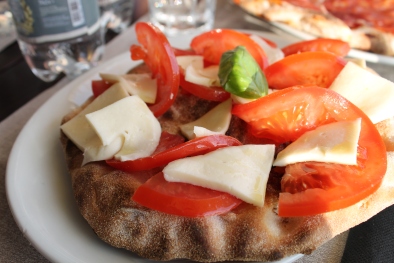 After dinner, we started making our way to the Trevi Fountain. On our way, we passed the Roman Forums (which we’re touring tomorrow in more detail) and Altare della Patria, a very impressive building which apparently is the ‘symbol of new Italy.’ 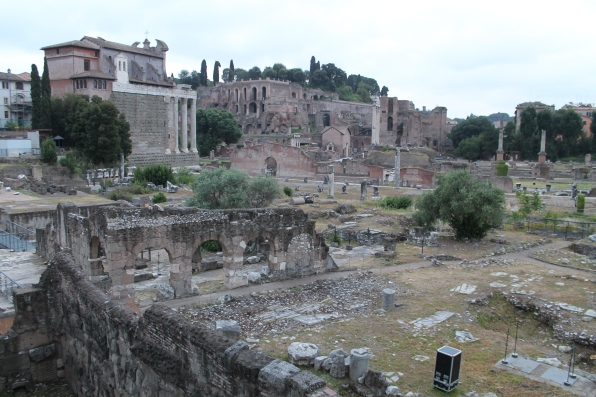 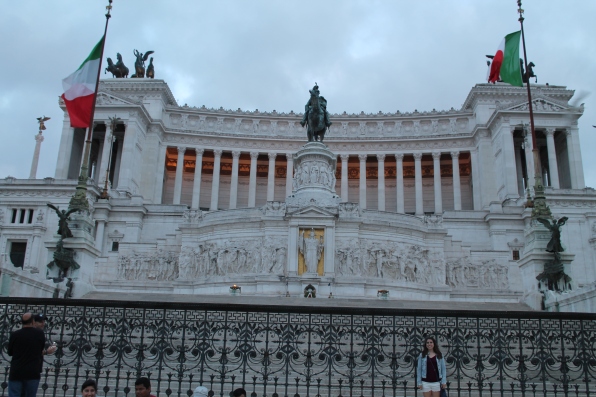 We made it to the Trevi Fountain just as the sun was going down so it was lit up and very pretty. The whole area was incredibly crowded but we pushed our way to the front, took our pictures, and tossed our coins in! Hopefully good luck (preferably with the weather) comes our way now. 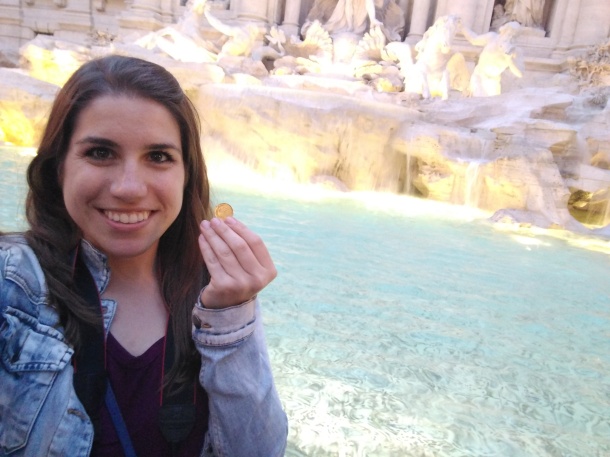 There were several gelato places just outside the fountain so of course we had to get some. We each got two scoops because we’re crazy and they were the biggest scoops of all time. The gelato was also very delicious! We enjoyed our gelato in front of the fountain before trying to visit one more spot before we ended the night. 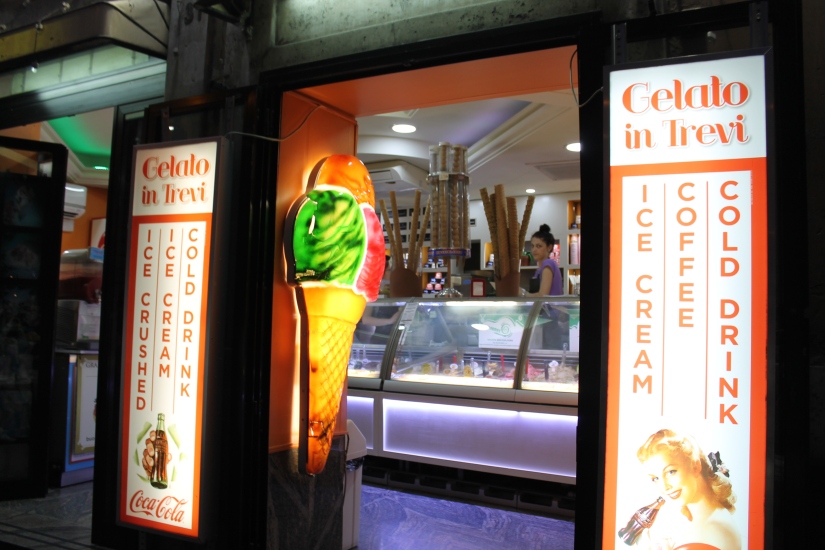 We headed to the Spanish Steps next, only to see that they were closed! It was difficult to tell if it was for construction or restoration but they had been closed since May 30 and didn’t have a sign posted when they’d be reopened. They were pretty, but it was a little bit of a bummer that they were closed. At least we can say we’ve been there now! 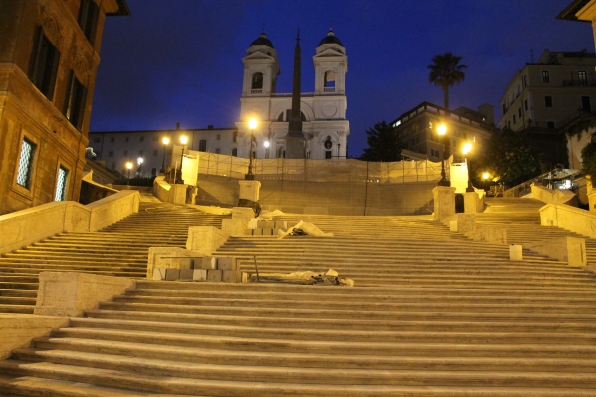 It was 9:30pm by this point so we braved the metro and went back to the hotel. I think we’ve used all public transportation in every city we’ve stayed in now (except Florence, which would’ve been unnecessary because the city was so small) and each have been so different. Our Roma Pass gave us free access to the metro though so we would’ve been foolish not to take advantage of it!

For whatever reason, possibly all of the gelato, we weren’t very tired so we played a game of Rummy before calling it a night.

Tomorrow, we have a city tour to learn more about the major sites but I think my group managed to see a lot of them today, so we have a nice head start. After our tour, we are going to try and see the Vatican and St. Peter’s. 6-7 people (including the people Victoria and I have spent most our time with) in our big group aren’t going to Greece so tomorrow is their last day, which is sad!