Today kicked off with a continental breakfast at the hotel; appropriate considering I just wrote yesterday about how lucky we were to have had a hot breakfast almost every day! I did, however, have a honey-filled croissant and it was pretty delicious. No regrets  there. There weren’t any apples and that was sad but I survived. I didn’t want to eat a lot anyways because tonight was our Tuscan Feast so I knew we’d eat a lot then.

We were on the road to Florence by 8:30am. Our pro bus driver, Antonio, pulled some serious bus-skills and backed out of the craziest parking spot, with just inches clearance on all sides which was really impressive. We all applauded him! I napped for most of the 1st leg of the bus ride. It was great and much needed. We stopped for a bathroom and snack break around 10:30am but I skipped that again in favor of sleeping. I didn’t sleep most of the 2nd lef of the trip though… I mostly enjoyed seeing the Italian countryside. It was very pretty and much more what I envisioned when I thought of Italy. It was awesome and gave Germany and Austria a run for its money.

We arrived in Florience just slightly after 12pm, dropped our bags off at our hotel, and immediately head toward the Piazza do Santa Croce. The square had a a soccer facility set up for a game tomorrow night; apparently, they play an old ‘no rules’ soccer game once a year. They put up a makeshift stadium and lay a lot of sand down because they expect blood to be shed. Terrifying. After we got to the square, we were on our own until 2pm when we would start our walking tour so Justin, Greg, Victoria, Heidi, and I went to grab lunch. We found a quick place and all got Calzones. The calzones were great. They would have been better if they were slightly warmer but overall I was not mad at them. Afterwards, we walked around for a little while and found a great gelato place! The amount of street vendors (for knick knacks, leather goods, paintings, etc.) was a bit overwhelming and in my opinion, made the city feel less normal. We had some time leftover so we sat on the steps of the Basilica di Santa Croce di Firenze until it was time to start our walking tour.

Our walking tour started at 2pm at the Basilica di Santa Croce di Firenze, built in the 13th century. It took over 100 years to build and houses the remains of both Galileo and Michelangelo. It houses over 276 tombs! We also learned about the flood of 1966 which damage the city pretty badly. There was a marker above one of the shops that showed how high the water went during that flood and it was extremely high, obviously causing a lot of damage. 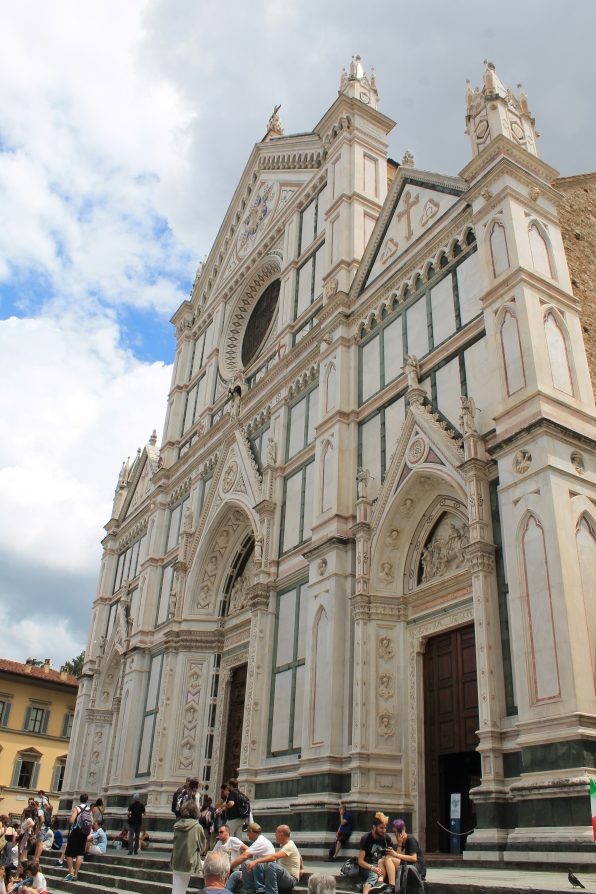 Next we headed to Piazza della Signoria, the political captial of the city, which houses the Palazzo Vecchio (a palace) among over other things. We saw the ‘open air’ museum of all original stautes (with the exception of the Statue of David which displays an exact replica made in 1910). The front of the palace has also never been remodeled or touched so it was impressive to see it in pretty good condition! Also, there were several statues, of all of varying complexity and uniqueness which made it interesting. 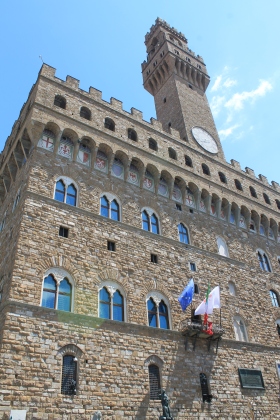 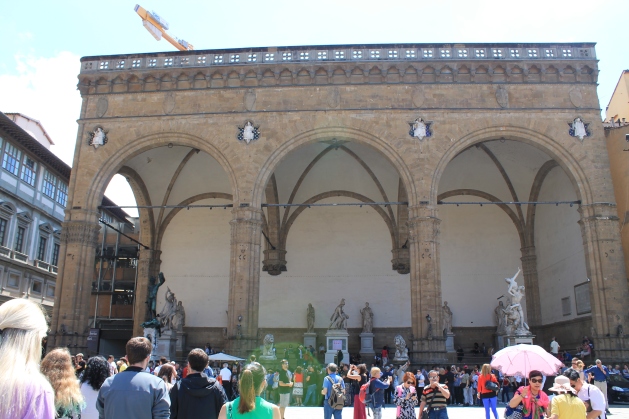 We headed toward the Ponte Vecchio ‘old bridge,’ the only original bridge of Florence, built in 1395. Apparently, during and after World War 2, all bridges in the city were destroyed in an effort to cut off communication from one side of the city to another. All of the 11 bridges were eventually rebuilt but somehow, the ‘old bridge’ survived and today, houses several jewlery stores. Fun fact: jewlers are only allowed to sell 18kt gold in Italy! 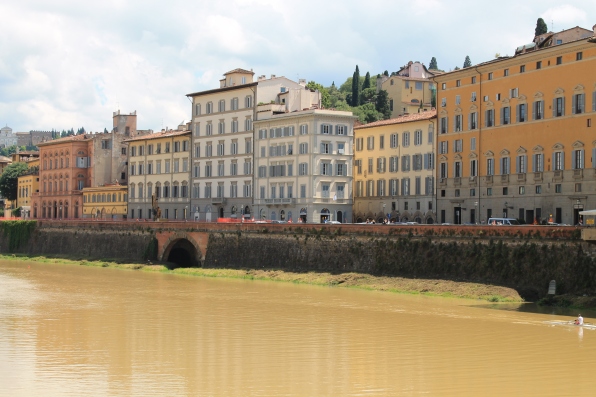 We saw a lot more during the tour and afterwards, we visited the Uffizi Gallery. We also had our Tuscan Feast tonight and if I am being perfectly honest, I am really drunk and do not feel like blogging. I will update with more details from our walking tour, the musuem, and dinner tomorrow night! 🙂

Alright, here is my sober update:

After the bridge, we walked down the original main road of Florence and past the ‘main forum,’ now callled the Piazza della Repubblica. Apparently, when Florence became the capital of Italy for a short period of time, the city was almost entirely rebuilt. Several old buildings were destroyed in favor of new, classical ones and that is very apparent in this piazza. There is only one column, standing in the middle, that is from the original Florence. There is also a coffee shop there called Cafe Gilli which has been in business since the 1700s. Our tour guide pointed out a gelato place called Venchi Cioccolato which she claimed had the best chocolate gelato in Florence so we took note of it so we could revisit it later! 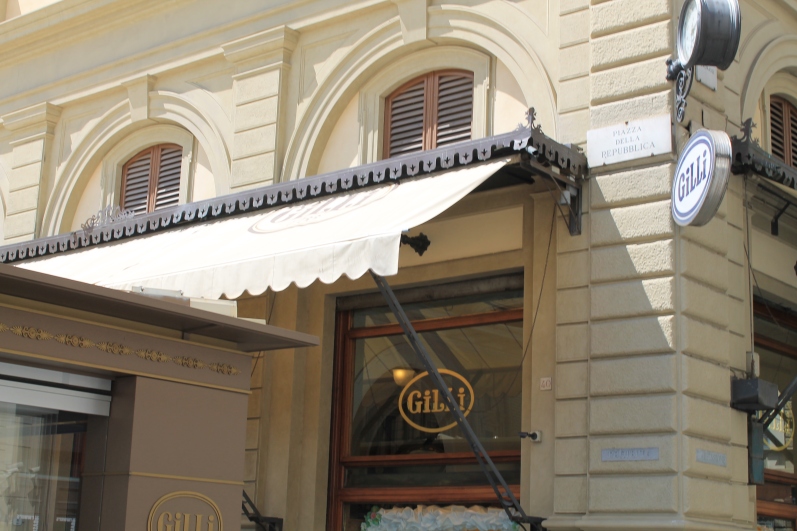 At the end of the main rode was the Piazzo del Duomo which houses the Cathedrale di Santa Maria del Fiore (the Duomo), the Battistero di San Giovanni, and the Campanile di Giotto.

The Battistero di San Giovanni is the oldest religious building in town, built in the 11th century. It was also just recently restored (they cleaned the marble) so it looked a little crazy but still gorgeous. Appararently, that was THE place to get baptized back then and they had so many happening each day that they counted the number of babies baptized using beans: white beans for girls and black beans for boys. Then at the end of each day, they’d just count the beans. On one size of the Baptistery were the Gates of Paradise (well, a replica) which are bronze doors depicting different stories of the Bible.

The Cathedrale di Santa Maria del Fiore had a similar exterior as the Baptistery: very extravagant and detailed. Its marble was also recently cleaned so you could really see the details of the building. We were able to go inside of the cathedral as part of the tour which gave us a good opportunity to see the famous Dome it contains. The inside of the building was incredibly different than any other cathedrale we had been to in that it was very, very simple. The designers intentionally made the exterior in a way to show the world that they were rich and powerful but then made the interior simple because intended to focus on prayer and worship. The Dome, built in 1420, weighs 30,000 tons and is actually two domes, an inner dome and an outter dome, to help distribute the weight. You can climb the 463 steps to the top and get a great view ot he cit but we didn’t have time to do that today. 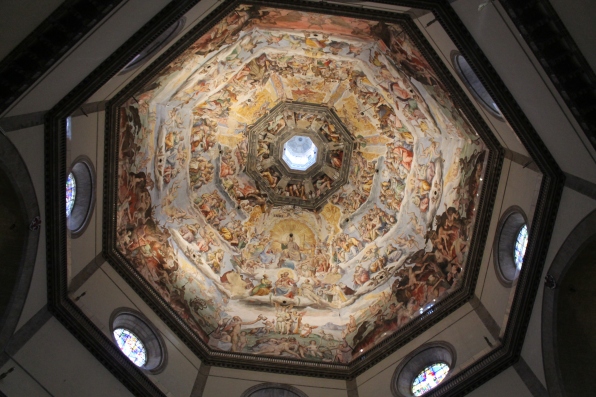 Our walking tour ended around 3:15pm and a few of us immediately went to the Venchi gelato place the guide had recommended: we were ready for round two of gelato! It was SO worth it and she was correct, it was the best chocolate gelato I had tried since arriving in Italy. We re-visited the old bridge to get a few more pictures and then headed toward the Uffizi Gallery. 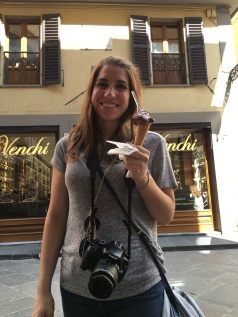 The Uffizi Gallery was HUGE. It was probably the biggest museum I’ve ever been to and housed all sorts of artwork and statues from the Renaissance. The statues were cool to look at and there were some paintings I recognized but for the most part, the artwork wasn’t my cup of tea. We walked through all of the rooms/floors anyways though and it was still cool. 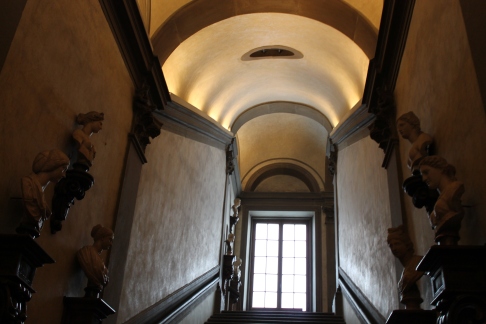 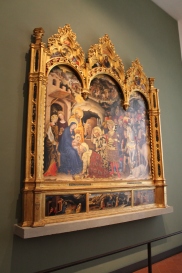 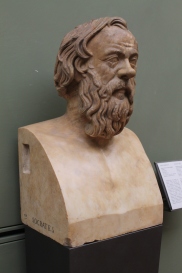 Florence is not only famous for it’s Renaissance artwork, wine, and gold jewlery; they are also famous for their leather work. We decided to visit a leather store, Misuri Leather, and a few people picked up some souveniers.

After some shopping, we headed back to our hotel to get ready for our big Tuscan Feast at Il Latini. It was a very large, 3 course meal with bottomless wine. I have never been a fan of wine… but that all changed for at least one night! The feast was indeed a feast with an abundance of amazing food and delicious red, house wine. It was fun to dress up and go do something fancy too. With everyone socially lubricated from the wine, some crazy things were said and done but I had a great time. There was also 2 month old beagle there, named Theo, and his owners let me pet and hold him. I died and went to heaven. 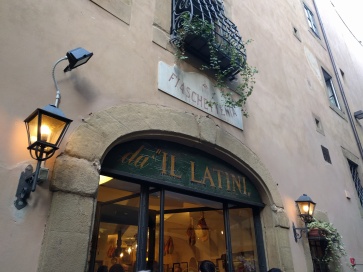 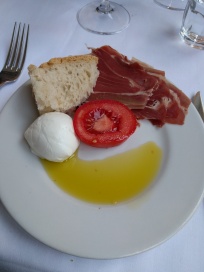 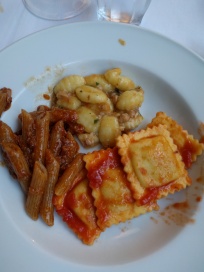 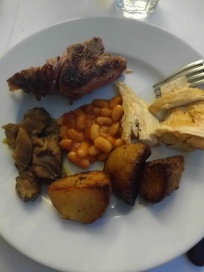 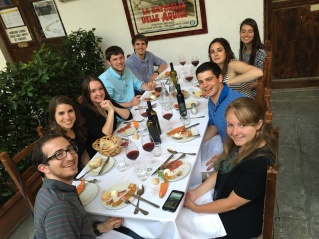 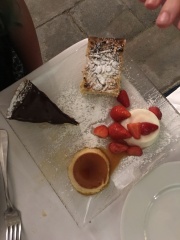 Afterwards, almost everyone (including Victoria, who had her first shot tonight!) went to a nightclub but I know that good things never happen at a second location so I went home and played cards with Justin. I was pretty drunk (see the original post above) so it was interesting getting home. I was convinced my room number was either 276 or 256 but when I retraced my steps, I ended up at room 268. I took a gamble and put the key card in and luckily it unlocked! I don’t know where I got 276 or 256 from but I am glad I made it back alive. We played a few rounds of cards before I attempted my blog. Once I gave up on that, I Skyped with Chris for a bit! The wi-fi in Italy has been good to me and it was nice to talk to him!

Florence is a pretty small city so it was easy to get from one place to another. We got to see quite a bit in the short afternoon we had but there is still so much more to see tomorrow!