Today was another amazing day in Greece! I was up and at breakfast by 8:30am and we were on our taxi boat to the other side of town shortly after. From there, we boarded the Flying Dolphin, a high speed ferry that took us to Hydra (Ydra) Island for the day; one of our optional excursions. The boat was like an airplane inside. It was pretty cool and got us to Hydra in about 30 minutes. 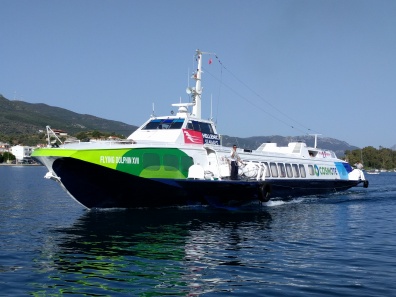 We were at Hydra by 9:45am and had some free time before our donkey rides later in the morning. The city has no vehicles (except for that we saw a garbage truck!) so everyone relies on donkeys to move goods and get around. During our freetime, everyone split up and did different things. Anna and I walked around into various shops; I bought my keychain (and found contact solution at the cutest pharmacy ever) and she bought a few scarves. The island was really pretty but there were SO many stray animals. I just about broke down in tears when I saw a dog digging through the trash for food only to come up empty handed. He gave me and Anna the most sad look and it broke my heart. I think of Elliott in that situation and it kills me. I had to walk away… it was rough. A lot of the cats I saw were either sleeping or had water or kibble so I felt less bad for them but it was still rough. That combined with the fact that all of the donkeys looked miserable and overworked (also, I hadn’t seen any grassy or shaded areas for them and the whole place was paved with slick rocks) just made for an emotional time. I’m weak when it comes to animals. 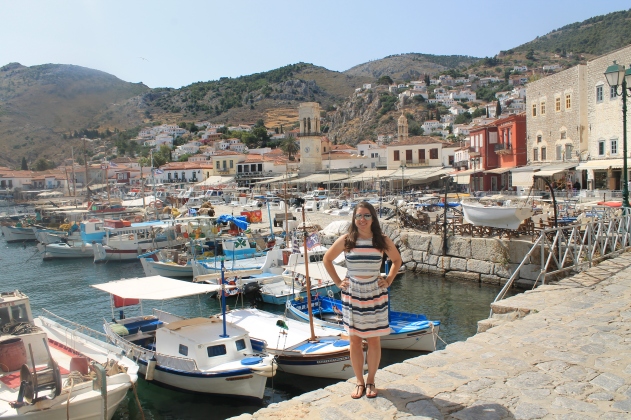 We re-grouped at 11:15am and headed over to our donkey ride. I really didn’t want to ride one, mostly because I felt bad for the poor animal. Avery was asking the lady running everything (I’m assuming she was Harriet as the placed was called Harriet’s Hydra Horses) about their treatment and she was saying positive things so I felt a little better but it was a little uncomfortable. The actual ride wasn’t that bad but it was weird. What’s crazy is that I eat meat so I must be subconsciously okay with the unethical treatment of animals. I’m a mess. 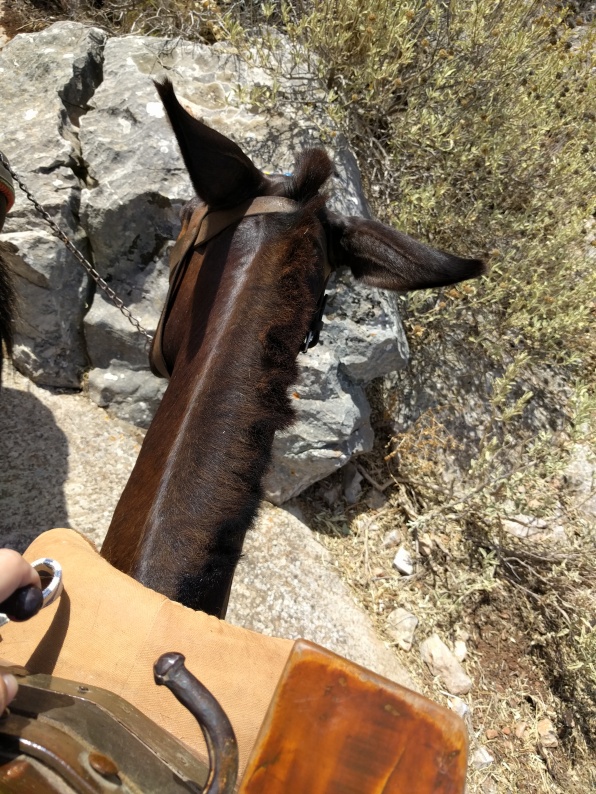 Our ride lasted about 30 minutes and I’m glad I stole Katy’s idea to cover my legs with my beach towel because I was feeling extra fried and sunburned. The towel definitely saved my legs. I ran out of my sunscreen yesterday so I was using other people’s and I just felt like I wasn’t covered enough. I got a little pink but somehow managed not to burn.

We had lunch nearby and like all Greek food apparently, it was delicious. We had a Greek salad, chicken, and an interesting dessert made from semolina. There were a lot of stray cats around us and I was trying not to feed them so that they wouldn’t stay but I caved… as we left I stole our leftover bread and passed it out to stray cats as we made our way to the swimming hole. Call me Robin Hood. 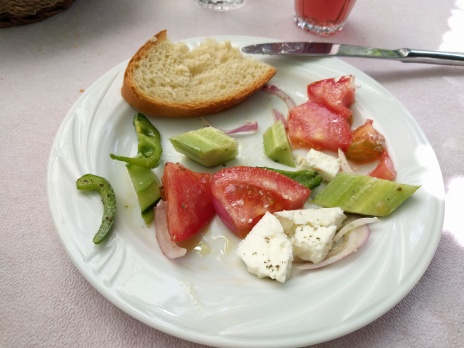 We went over to the swimming hole and it was incredibly hot outside so I just jumped in, forgetting how salty the water was. It’s so intense… I didn’t last long and just sunbathed on the ledge for the most part. The ledge wasn’t too high up and there were no rocks below so a few people started jumping into the water from there. I didn’t plan on doing it but eventually did because it looked fun and I didn’t want to regret not doing it!

That is when things got crazy. There was a much higher rock that Marlene said we might be able to jump off of but when we got there, she had told us not to. Well, a random guy at there decided to jump off of it and it kind of peaked some people’s interest… particularly mine, Abby’s, and Miguel’s. The 3 of us decided to go scope it out and see if the rocks below were clearable. While we were up there, another guy decided to go jump it! This really made us want to go now but every time we looked at Marlene, she was shaking her head no and telling us not to do it. The guy scaled the cliff and came back up to meet us and while we were talking about the best way to jump, Marlene pulled out her camera which I interpreted as her actually wanting us to jump. The guy’s name was Alex and he was very encouraging and I said if he jumped again and waited for me at the bottom, I’d jump. So, he did and now I had to! By this point, everyone in our group AND strangers had their cameras out waiting for me to jump. Abby was right there and patiently and quietly counted me down and then… I went for it. It was terrifying and amazing all at once! Words can’t describe the excitement. After I went, it was Abby’s turn. Alex and I waited for her and encouraged her and then… she jumped! Two down. Soon after, Trent, Neelam, and Hannah jumped too. Just before we left, Miguel made the leap. As we were leaving, others in different groups started trying it. Marlene wasn’t mad but couldn’t believe we actually did it. She said we were the first group she’s had to actually do it so, props to us. It was very, very exciting. I still can’t believe we did it! 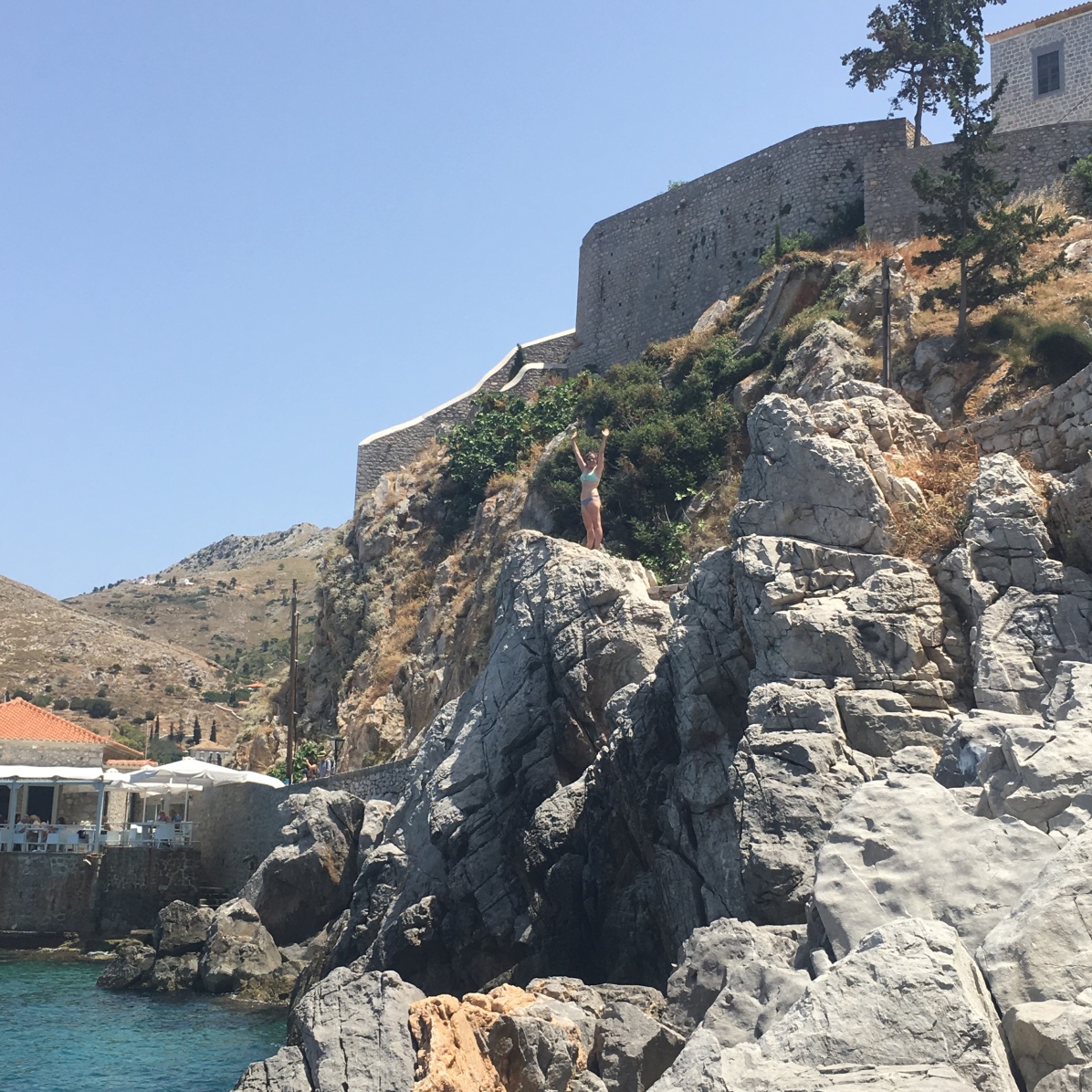 By then it was time to catch another boat back to Poros. This one was called a Flying Cat and was twice as big as the first one! Some of us were so comfortable that we fell asleep for the short ride. 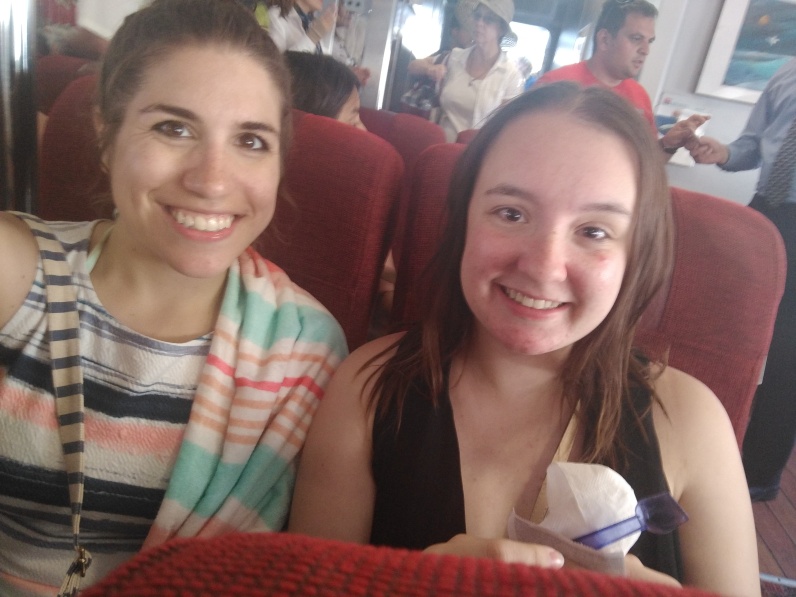 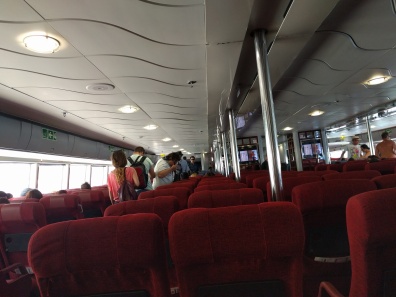 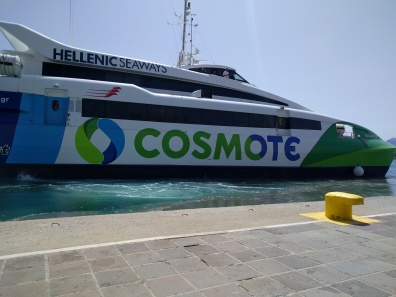 When we made it back around 3:30pm, we took our taxi boat back to the hotel. Some people sat by the water, some people napped, and some people went to the pool. I went to the pool for a little while, showered, then took a good hour and a half nap. The sun really takes it out of you!

Our dinner tonight was also a toga party so after my nap I made a toga out of a sheet for the first time ever. Thank you, Google. It turned out pretty cute! We had a decent dinner at the hotel (I’m still obsessed with the Greek salad) before taking some photos by the pier and heading to the pool for some drinks. Everyone looked so cute in their togas – we did a good job! At the pool, we had some drinks (I had a very redeeming strawberry daiquiri), played Truth or Dare, and played Catchphrase. Just before 11pm I headed back up to my room to re-pack my suitcase for tomorrow’s travels to Athens and blog. 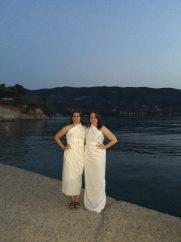 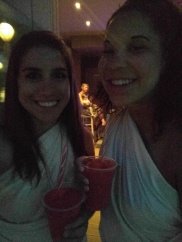 Tomorrow, we leave Poros early in the morning to go to Athens. Athens is supposed to be REALLY hot so here’s hoping we all survive it. It’s alao our last day of the trip as we all leave the next morning to go back home. I can’t believe how fast it’s gone and how much we’ve done! I’ve loved it so much but have missed Elliott and others and will be excited to see them all again. I know I’ll be tough getting back into a routine though, especially after having the most relaxing time in Greece!