First, a follow-up to the protest we walked through in Munich: the protesters were farmers and they were protesting the cost of milk; they want more money for it and were threatening to quit production (or something like that). So, we walked through an angry farmer protest in Munich and lived to tell about it! Go team.

Now for today… it was a mostly rough day. I barely slept last night because Victoria was sick and snoring louder than usual. It woke me up and then kept me up which just made for a cranky start to the day. On top of that, I woke up with insanely large blisters on both of my feet. I could tell from the day before that I had blisters forming but it wasn’t until this morning when I realized the severity of them: my right foot had a blister about the size of a quarter and my left foot had one about the size of a nickel. It hurt to even walk. I don’t think you’re supposed to pop blisters normally but I looked it up and the internet (who is always correct, obviously) said that if it is a large/painful one to pop it and cover it, so that is what I did. They felt a little better after that, but still bothered me most of the day. That is what I get for consciously wearing non-walking shoes to a 24-day trip to Europe where we walk EVERY DAY. High five, me.

Think things couldn’t be worse? Think again. After our breakfast, we headed downstairs to take our things to the bus and I forgot there was a step outside of the elevator. I tripped and luckily caught myself but still managed to roll my ankle. It hurt pretty bad for a few hours but didn’t swell and got better as the day went on. It just was not a good morning for me.

We left for Austria, Marlene’s home country and our 6th country to visit, at 8:45am. It wasn’t a long drive but I did managed to nap some of it. Mostly, I just rested and enjoyed the beautiful drive. Austria is incredibly gorgeous. We saw amazing lakes, mountains, and rivers which may sound ordinary but trust me, they were anything but. I wish I could describe just how beautiful this county is! It was a peaceful and relaxing drive, which was what I needed after my awful morning. As we drove in, Marlene hit us with some fun facts (I love a good fun fact) about the country: 60% of the country is covered in mountains, they believe in free education so even universities come at no cost, they are the home of Red Bull, they are known for their milk chocolate, cheese, bread, and cakes, it is the home of Arnold Schwarzenegger, there are 8.2 million people in the country (which is pretty small), and back-in-the-day the Queen at the time had 18 kids and married them off to emperors of other states/countries which meant Austria had the most control at one point.

Our first stop in Austria was actually NOT in Austria; it was about 3 minutes outside of Austria, back in Germany. We arrived the at Salzburgwerk Berchtesgaden Salt Mines at about 11:45am after a serious ‘toll tag’ issue (or whatever their equivalent is). Our bus apparently didn’t pay enough as we crossed in so we got pulled over by police! It was probably only a 30 minute delay but it felt like forever. Once we finally got there, we suited up in a miner jumpsuit and went on a detailed tour of the salt mines. It was a pretty cool, interactive tour: we rode a cross between a train and a rollercoaster through the mine, went down a crazy wooden slide (twice!), crossed the most crystal-clear lake I’ve ever seen, and tried salt directly from the mine’s wall. There was a sign that said we weren’t allowed to take pictures but Marlene said it was fine so I did… but the tour guide reprimanded me twice: once verbally, once with a disappointed look. I am pretty sure he hated me but I got some good pictures! Overall, it was a really cool experience. We looked ridiculous in the jumpsuits but it was pretty cold in the mine so it actually worked out well. 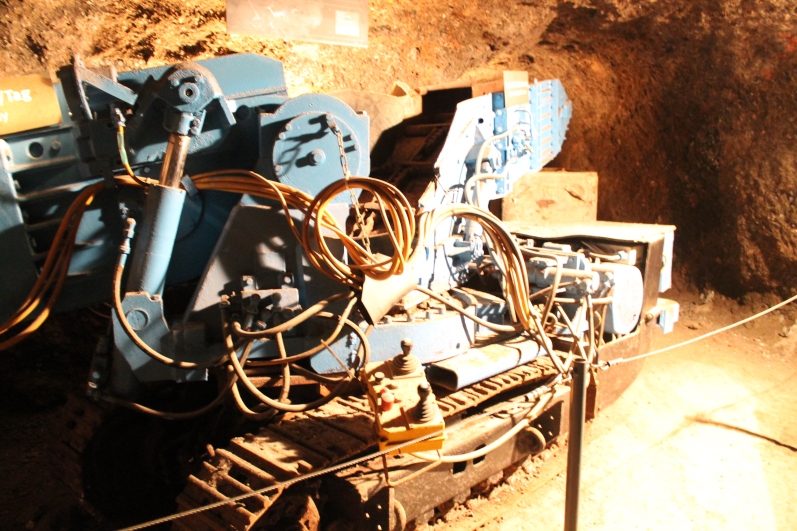 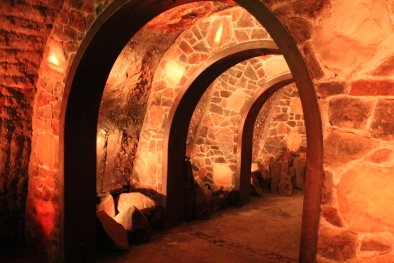 After the tour, we headed for lunch. What was supposed to be a 30 minute drive to Salzburg (now back in Austria) took over an hour because all of Austria runs off electricity generated by the water instead of using nuclear plants and one of their city buses had come off the line. It created quite the traffic jam! When we finally made it to lunch around 1:30pm, we were all starving. Marlene had been promising us that Austria has the best schnitzel so she took us to a place she knew we would love: a restaurant called Sternbrau. She had talked it up so much and we had waited on that bus in traffic for so long that I had pretty high expectations and let me tell you, that schnitzel did not disappoint. It was amazing. Beyond amazing. So many people on this trip are looking forward to the food in Italy but schnitzel was the highest priority on my list so I was pretty happy to finally have had an authentic one! I also had a salad which was exciting because we are definitely not eating enough vegetables and greens here and I miss them. Lunch was great and totally worth the wait! The weather was great too so it was nice to just sit outside and enjoy the meal. It was another moment like I had in Paris when I had crepes outside the Eiffel Tower… this time, I was eating schnitzel an at outside cafe in Austria. It was a pretty cool moment!

After lunch, Marlene gave us a short walking tour of Salzburg because it is where she grew up and lives when she is not doing these tours! You can definitely tell she loves this place and after walking around, I could see why. Salzburg was amazing*. Jeans might have been a bad idea but it was still great. We got to see several things: the house where Mozart was born, city hall, the tiniest house (now a jewelry store), the Salzburg Cathedral, Fortress Hohensalzburg, and a garden where parts of “The Sound of Music” were filmed. We also stopped to try a genuine Mozartkugel, a small, round ball made of marzipan, nougat, and dark chocolate. It was delicious! There were some other cool things too like a statue in front of a building where as you walked closer to the staute, the crown on the building looked like it was being placed on the statue’s head and a statues/fountain where horses had to be cleaned/rinsed off at before they entered the city. It was a short tour of Salzburg but we managed to see a lot. We were lucky to have a tour guide from there to help us out!

Our tour ended around 5:30pm and we made our way to the Alpine Center. A few of the girls bought “The Sound of Music” in Salzburg so we watched it for the 1.5 hour drive over. Most of the people on the bus hadn’t seen it before, including Marlene, which was surprising to me! I love that movie. Unfortunately, we didn’t get to finish it but maybe we will watch the rest on our way to Italy on Thursday. The city-less Alpine Center (seriously, apparently it is part of a village and not a city) is a resort with several things to do and see. It is surrounded by mountains and is seriously just the cutest hotel. Our room is huge and even has a balcony with a great view. We arrived just shortly after 7pm and our group dinner was scheduled for 8pm so we only had time to check-in and explore the resort itself before eating. Dinner was great but I was still really full from the un-Godly amount of schnitzel I ate at lunch so I didn’t eat too much of it. The soup is worth mentioning though… and we had access to a salad bar! Hooray for more vegetables. My actual entree didn’t come with vegetables but the other option did and Justin and Heidi didn’t want theirs so I was quick to grab those as well. 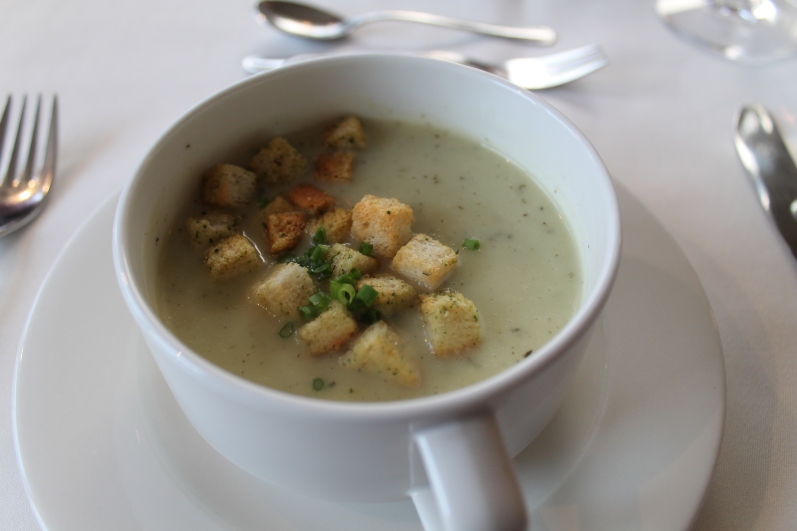 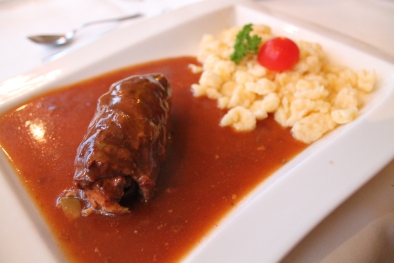 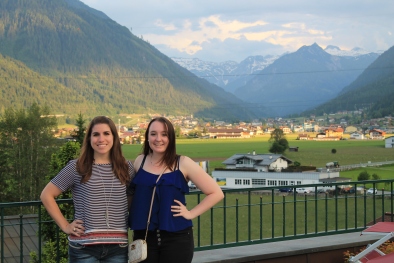 After dinner, a few of us sorted out what we wanted to do tomorrow. The resort has hiking and biking trails (among other things) so we wanted to plan out the best options. Tomorrow is technically a free day but we also have our white water rafting excursion down the Enns River and I am really looking forward to that. The hiking and biking will be great exercise too; something I definitely miss and need to be doing more of!

All-in-all, it was a good day. The weather was great and the bus rides were mostly short which allowed for a lot of extra sight seeing.

Our trip is 50% over today and it’s been great so far. I’ve been having a lot of fun and have thoroughly enjoyed everything we’ve done. I am, however, starting to feel really drained. I’m the type of person who can go and go but eventually needs to crash and unfortunately, crashing is not an option on this trip! I also need alone time to sit in silence and recharge and I obviously don’t have many opportunities for that either so I am starting to get irritable. I’m trying to keep it together and I am hopeful tomorrow’s adventurous day outside will help pep me back up. Also, the time difference between me and everyone I know is starting to take a toll on me. I can go for days without talking to people and be just fine but not having the option to just text a friend or someone during a long bus ride to help pass the time kind of sucks. A 7 hour difference is pretty intense and while I like talking to the people in our group, it would be nice to Skype my family or friends (or dog!) every so often… or at least at normal hours. Let’s hope these few days at the resort help me get recharged for the second half of the trip: Italy and Greece!

*I seriously need a new word for amazing; I might be using it too often!

One thought on “… to Austria!”