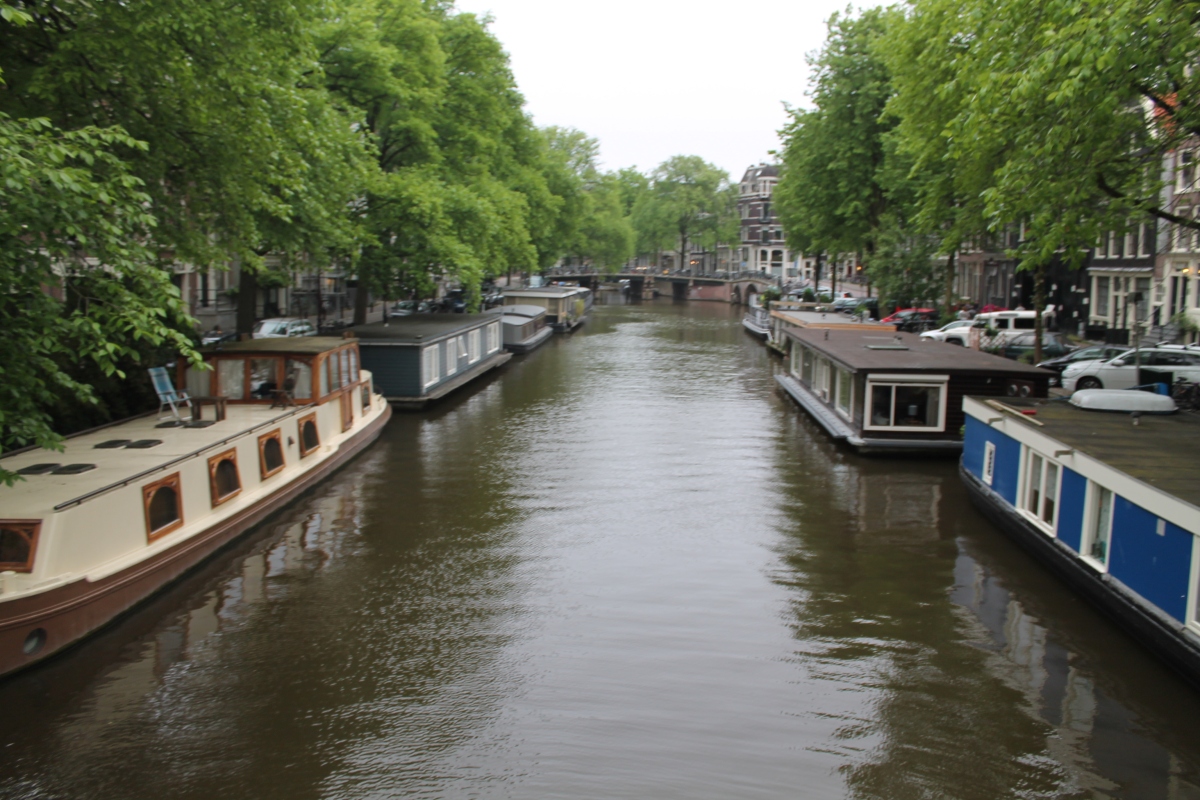 Today was another big travel day as we made our way to the Netherlands with a pit stop in Belgium. We kicked it off with breakfast at the hotel and were on the road by 7:30am. We stayed up late last night talking, loading pictures, and Skyping people so only really got about 3-4 hours of sleep… a 6:00am wake up time was not fun.

The bus ride to Brussels was just over 4 hours long and I slept almost the entire time. Most everyone did; we were exhausted. After doing so much in Paris for 2 days, it was nice to relax and get some rest. Shout out to my ridiculous neck pillow that I almost didn’t bring and to the random blankets Victoria bought in Dover for making it a decent sleep, too. We made a bathroom/snack pit stop a few hours in but several people slept through it, including me. Oops. Marlene put on Ocean’s Twelve for us to help pass the time; I slept through most of that as well.

We arrived in Belgium around 11:30am and made to Brussels a little after 12pm. The weather was still overcast and a little rainy but overall not too bad. It was warmer than Paris so even if we still didn’t get to see the sun, at least we weren’t freezing anymore. This city was again, completely different than anywhere we’d been so far. The buildings are a mix of modern and historic but there were more homeless people and trash on the streets than anywhere else. I was surprised at the number of women begging with their children, too.

Because Brussels was just a pit stop on our way to Amsterdam, we only had enough time to visit the Grand Place and Manneken Pis. The Grand Place was very… grand. I’m not even sure what the buildings are used for these days but it was very cool to see. It was also very crowded! The Manneken Pis was down the street, tucked away in the corner. Apparently sometimes they dress the statue up so today he was dressed as a doctor for heart disease awareness. The weirdest thing about the statue is that the town clearly takes advantage of its popularity so they make chocolate replicas and put him on souvenirs. The statue is of a naked toddler boy… making a wine bottles opener of him and making the corkscrew part of it as the toddler’s “piece” is just weird! And who is actually comfortable eating a chocolate toddler penis? So weird.

We also tried all of the notorious Belgium food such as waffles, frites, and chocolate. The frites (fries) were great but in effort to not over eat, Victoria and I split those. We had dessert waffles (similar to what we had in London) and they were of course great. I added strawberries to make me feel like I was being somewhat healthy but I don’t think it works that way. I couldn’t even finish it. They also served it to us with the smallest forks any of us have ever seen and they were so difficult to eat with. I’m convinced they do it just to screw with us tourists! Then we started walking into various chocolate stores and trying samples; we all eventually bought something of course. They bought things to take home to family and friends but I didn’t… apologies to my family and friends but I have no self-control to carry around chocolate for 2.5 more weeks. After trying so many sweet things though, Justin and I decided to split a “croc waf” which was essentially a ham and cheese grilled sandwich but with waffles instead of bread and it was delicious. We needed some protein! 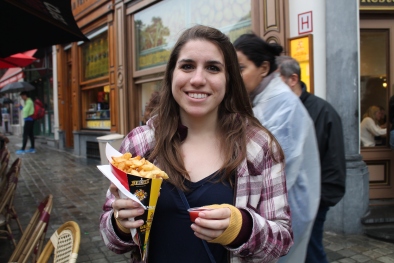 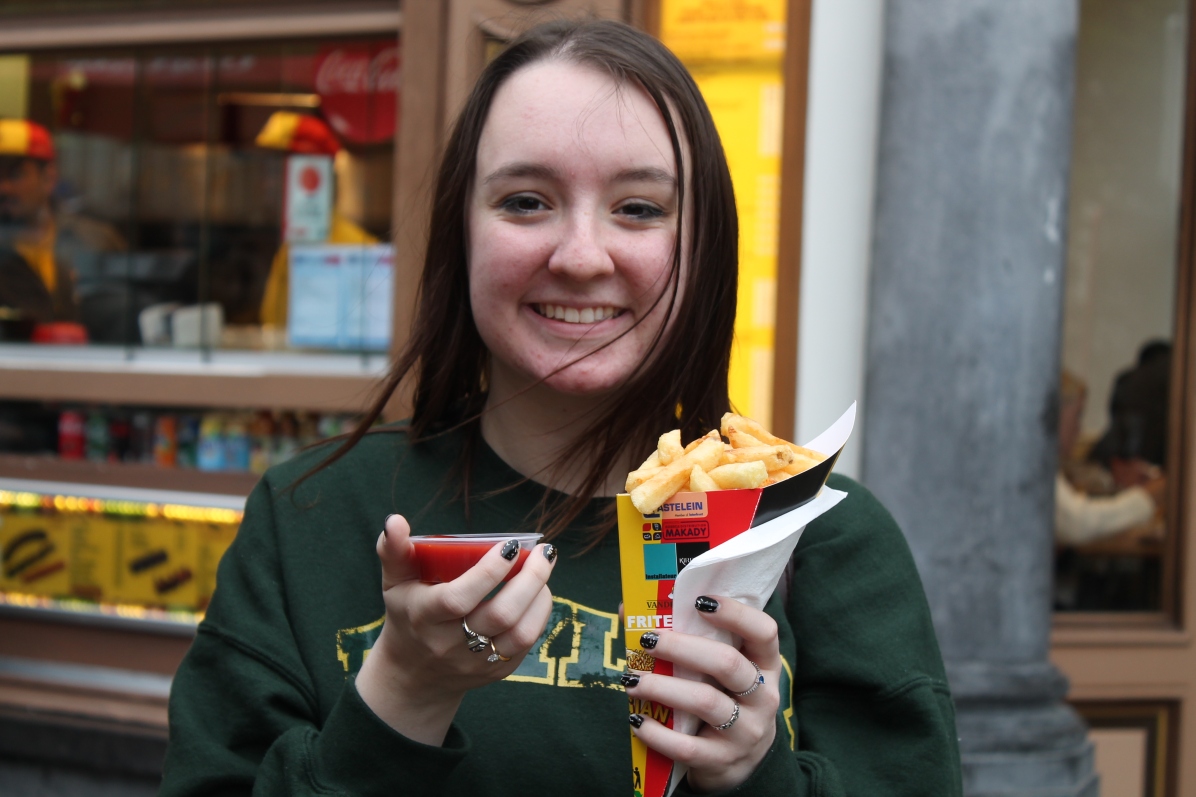 As we drove in and out of the city we passed other things that looked cool but with tight schedule, we just didn’t have time. Marlene gave us some history of the city and shared some fun facts with us: all of the highways are lit up and you can see them from space, they are the headquarters of the European Union, and they were the second country to legalize gay marriage.

We were on the road again by 3pm for the last leg of the drive. I fell asleep again but woke up a lot because I felt like we were starting and stopping a lot; I later found out we had just been in a lot of traffic. We made it to Holland around 4:30pm for another quick break. I had some Wi-Fi so I was able to catch up on emails and social media (I have a 55 day snap-streak I don’t plan on breaking!)… priorities. Can you believe we’re already in country #4 of the trip? Time flies. After today, we’re 25% through the tour which seriously blows my mind.

As we continued our drive to Amsterdam, Marlene shared some more fun facts. I love a good fun fact! One of the rivers (don’t ask me which one, it’s not easy to hear her sometimes!) gets higher throughout the year because people throw unlocked bicycles into it and the city has to fish them out regularly. They were also the first country to legalize gay marriage. It is very popular to ride bikes and most people ride, on average, 1.8km a day. The Dutch are also the biggest beer drinkers in Europe; so much so that in the 1970s, they served light beer in schools!

My friend and co-worker, Sjoerd, lives in Amsterdam so I thought it would be cool to text him and see if he wanted to meet up with some of us for dinner when we got into town and then show us around but it turned out he was vacationing in Spain! What are the odds? It would’ve been cool to see him!

We arrived at the hotel around 6:45pm, dropped our bags, and headed directly to the Anne Frank house with a group of people. We don’t have much free time tomorrow so we wanted to utilize our time wisely today! We are actually staying slightly outside of the city so we had to take a train in and that system was a little different then what we were used to but we figured it out. It was fun to walk through the city and see the canals and different buildings on our way. It was cold and a little misty but still nice enough. Victoria slipped and fell and her phone was inches away from falling into the canal; luckily, it didn’t.

I’ve visited the Anne Frank House before with my family in 2000 and actually still remembered it pretty well. It was cool to see it again and the line wasn’t too long so that was nice. It was still just as powerful as it was back then. 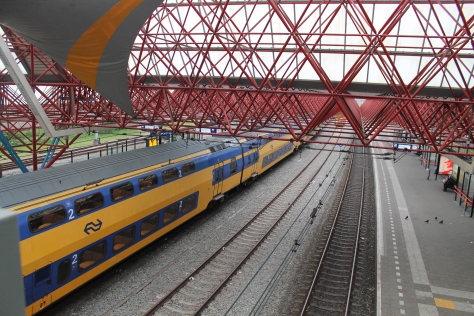 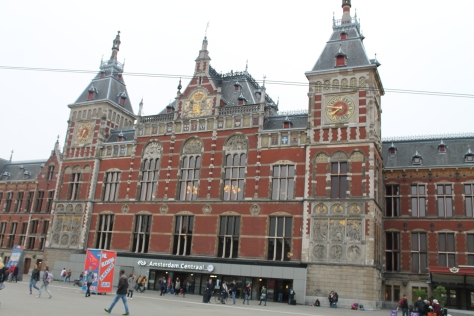 After the museum, Victoria and I split from the group and hauled over to Cau, Gary’s (her dad’s) favorite restaurant just outside of Dam Square. Her phone would only give driving directions so she accidentally led us the long way so we were walking FAST to get there in enough time before it closed. We made it and got to eat some amazing steak! Victoria got a rib-eye, I got a sirloin, and we shared chunky triple fried fries, truffle Mac and Cheese, and an amazing grilled chicken salad. it was so worth the extra walking! Thanks for treating us, Gary! We really enjoyed it. 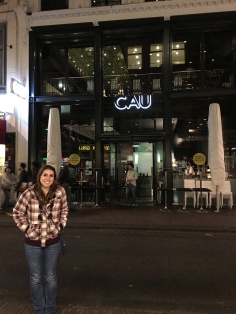 It was past 11pm by the time we left – what a long day. The two of us were alone, navigating the streets of Amsterdam at night was a little nerve wracking but we made it back to the train station safely and coincidentally ran into the rest of our group from earlier and we all traveled back together. What are the odds??

Tomorrow we have a long planned day but luckily we have a semi late start. Let’s hope the weather holds off (well, the rain at least) so we can enjoy our time in the Dutch countryside!