Today was such a busy, cold, wet day but we managed to do and see a LOT of Paris. It was definitely an adventure. I also made a conscious decision to wear a dress even though it was 50 degrees outside… I only half regretted it. I was also really happy I packed an umbrella.

We started off with a hotel continental breakfast. I already miss the eggs and bacon from our London hotel! It was nice to have fruit again though.

Our day officially kicked off at the Musee du Parfume for Fragonard. We learned about the history of perfume, how it is made, the different notes and what they mean, and how to wear it. Things I did not know: it is important to keep perfume in the original bottle AND box because light impacts the smell, it is important to keep it out of your bathroom because humidity and heat impact the smell, perfume changes smells throughout the day when you spray it on your skin so it is better to spray it on your hair and clothes, and you can ‘clean’ your nose of smells NOT by using coffee beans but by smelling your own skin and clothes because your nose already knows the scent. Something I thought was really cute was when she explained that women wear perfume in places (e.g. ears, neck, back of knees) to say “follow me” to men and mean wear perfume in places (e.g. chest, arms) to say “stay with me.” I don’t know if that is true but I liked it!

After the perfume tour, we met up with our city guide Janice and took a bus tour around the city. She was quite the hoot and taught us a lot about the city. By this point it was raining so it was nice to be on the bus but unfortunately it didn’t allow us to take many pictures. We saw so many things that I would never be able to list them all as she also talked really fast and trying to remember names of places in a foreign language is not easy. We made 2 pit stops though and were able to get off the bus and take a ‘click clack Kodak’ as she put it (LOVE that phrase): the Eiffel Tower and Dome des Invalides. As a reminder, it was 50 degrees and raining and I was IN A DRESS so these were short stops for us. 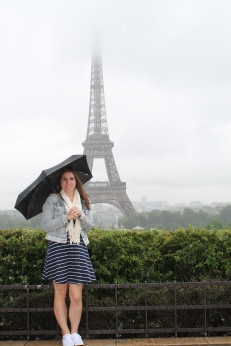 We ended our tour at the Cathedrale Notre Dame de Paris and officially had the remainder of the afternoon to ourselves. Almost the entire group (everyone except Victoria, me, and our new friends Justin and Greg) took a trip out to Versailles but the four of us decided to stay in town, bear the weather, and see as much of Paris as we could which, looking back, I think was the best decision we’ve made so far.

The 4 of us had lunch at a cafe outside of the Notre Dame called Le Notre Dame (original) where I tried Escargot! It was actually pretty decent and I am glad I tried it. The cafe was definitely all-French so translating the menu was interesting (thank you Google Translate though). The waiter spoke some English so that helped too. 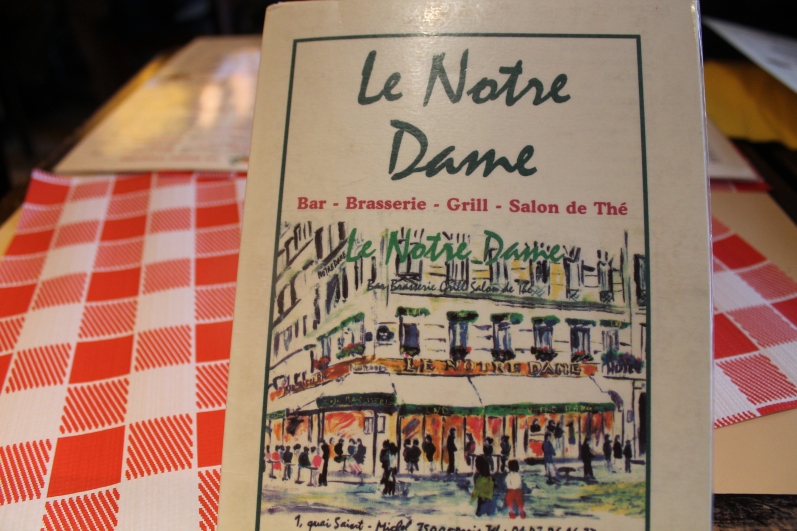 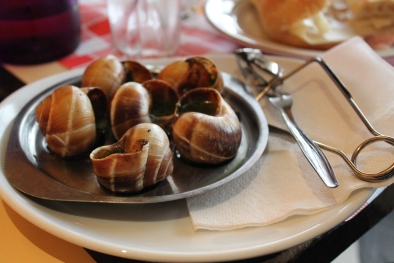 After lunch we headed across the street and toured the Cathedrale. The inside of that church was so beautiful and it was nice to be warm for a little while. We also climbed to the very top in some very narrow staircases and got the most amazing views of the city. It was so worth the wait in the line outside and the 387 steps to the top. If it had not been so overcast, we would have been able to see the Eiffel Tower but even without it, the view was unbelievable. I was so glad we stayed back from the rest of the group and got to do that. 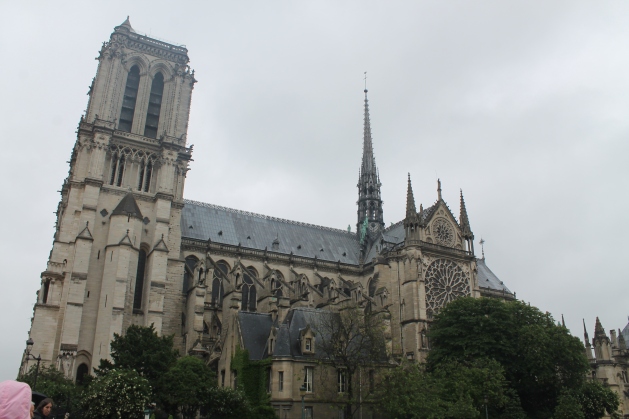 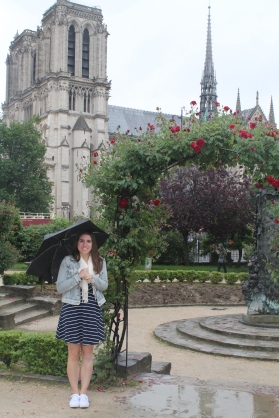 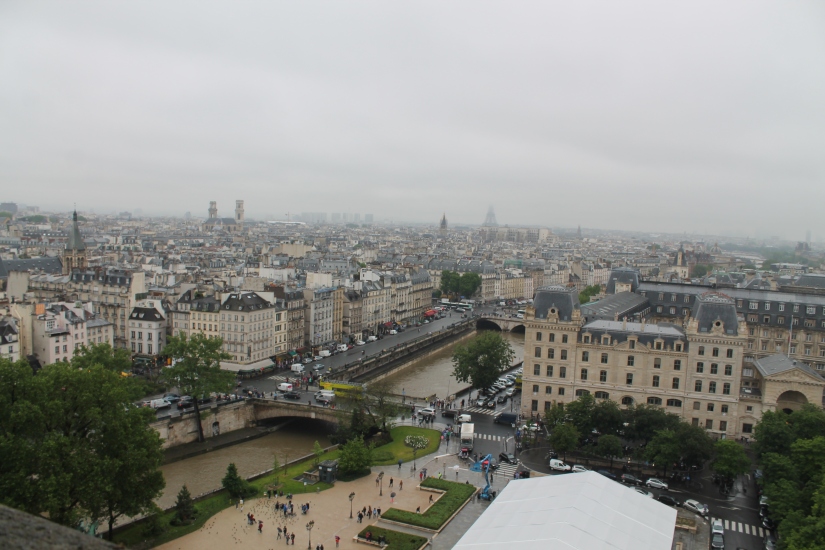 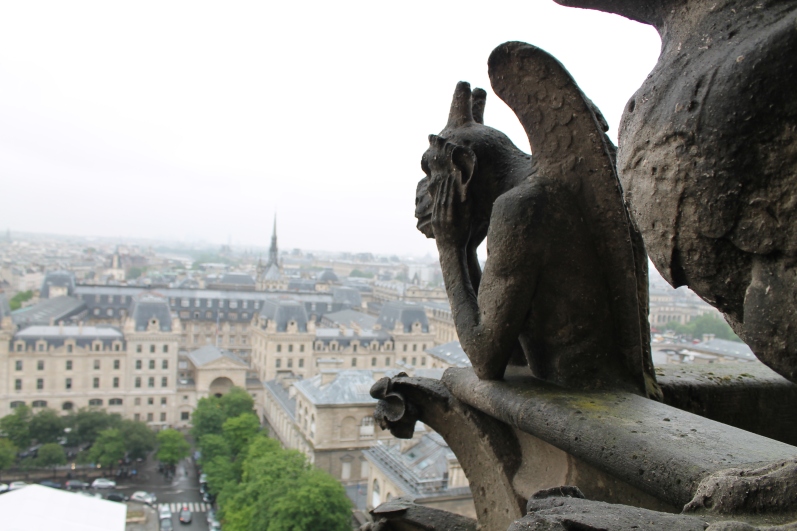 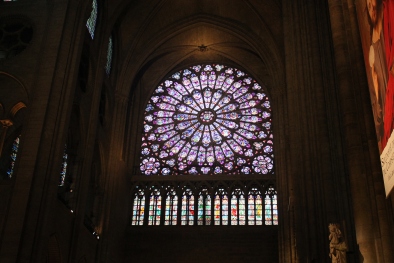 While we were in the area, we visited Crypte Archeologique and saw the history of Paris and in particular, coin making and ruins. It was a small museum but very interesting. The large boards had English translations but none of the item-descriptions in the cases did so it was pretty difficult to know what we were looking at. Not knowing the language is a bummer sometimes. 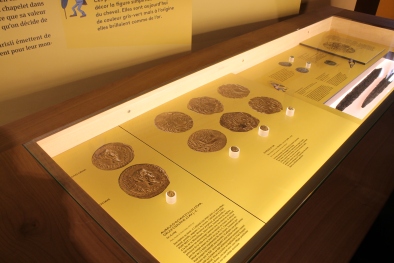 Next up was Sainte Chapelle. Again, another small museum but it was the first thing that literally, LITERALLY took my breath away and left me speechless. The church is known for its stained-glass windows so when we walked in, I was expecting some pretty cool mosaics and there definitely were but… it wasn’t until we went upstairs and I saw the most amazing windows I’ve ever seen. We rounded that corner and I don’t know what I was expecting to see but it just left me speechless. It was the most gorgeous thing I’ve ever seen. As we left, I stepped in a muddy puddle. That’s not important but it did make us all laugh. 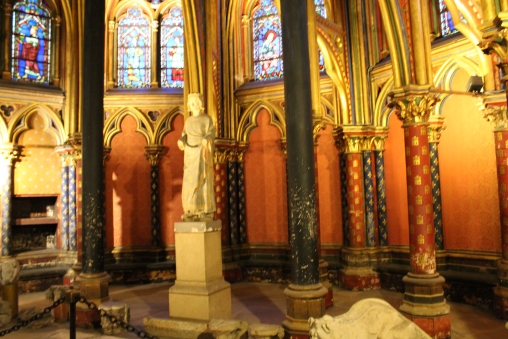 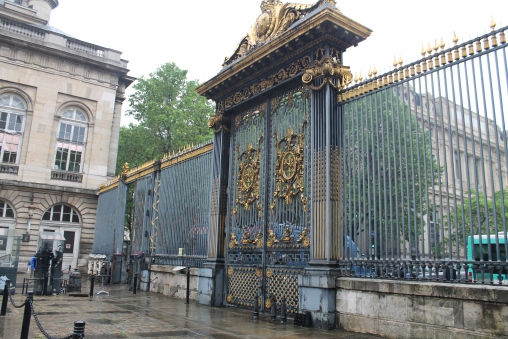 The Conciergerie museum was nearby so we visited that next. It is essentially a prison museum so that was strange but it was a really beautiful building. We saw where Marie Antoinette was imprisoned so that was cool. We didn’t spend much time there as again, it was another small museum! 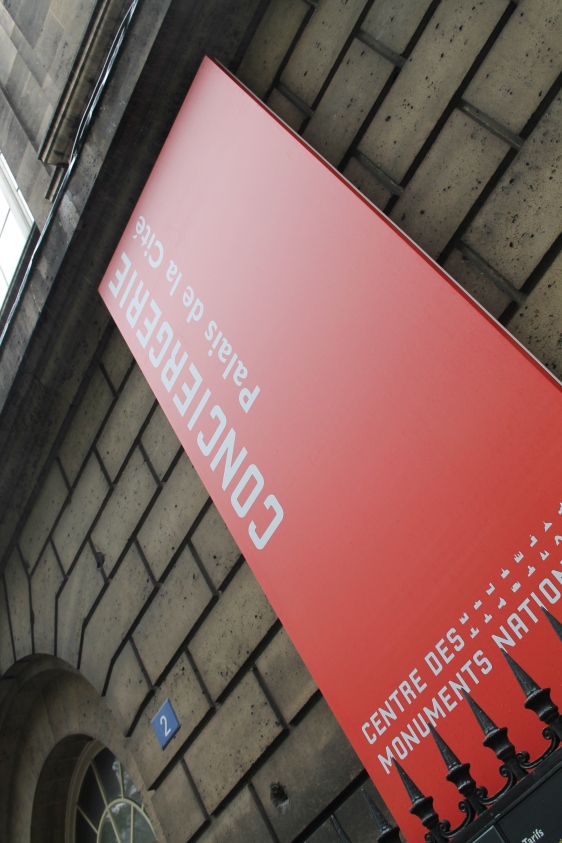 By this point it was nearly 6pm and everything was shutting down so we mostly did a walking tour of other areas. We passed Saint Jacques, Archives Nationale, Pompidou, and Bastille among other things. I really enjoyed just walking through the city; I’ve literally never seen anything like it. The shops are so small and all of the restaurants are mostly outside which would probably be awesome if the weather was better. It was just really cool to stroll through the streets. I definitely felt like a tourist and felt like people were not fond of us. 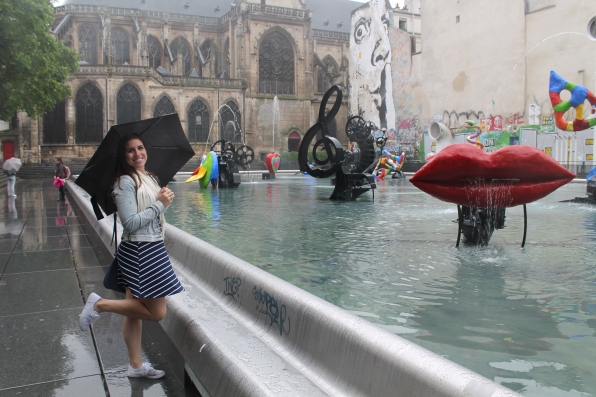 We were close to the hotel at this point and with our long night approaching, we decided to just head back, get warm and dry, and get ready for our dinner and show. The show was our first optional excursion and only 6 of us signed up so at 9pm, the 6 of us headed out to dinner at Deux Moulins. As usual, I ate way too much.

After dinner we made our way to the Moulin Rouge. None of us really knew what to expect but it was quite the show! The dancing, acrobats, costumes, and everything was so over the top. There was a rollerskating routine that literally made all of us gasp because it was so terrifying. I couldn’t even begin to explain the other acts. It was mostly in French so we didn’t quite know the plotline but based on the dances… I don’t think there really was one. It was tough to tell! We shared about 2.5 bottles of champagne too, which is always fun but I think it made some of us tired; it was a long day! 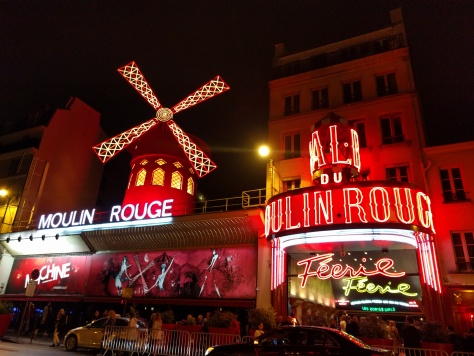 Wednesday will be another full free day and we have so much we want to see so we’re hoping the weather keeps people inside and makes room for us and the tourist spots. Marlene said EuroDisney is actually the #1 tourist spot in France so maybe that will help keep the lines clear for us. She also said the French are known to strike and protest and apparently there is one planned for Thursday that will shut down all of the subways; let’s hope that doesn’t start early! We have a lot to see and still a lot to eat (crepes!)!

It’s after 2am and it’s been a long day… until tomorrow!

PS – my straightener broke… that took all of 5 days! 😦