Our second day in London was just as amazing as the first, if not more. We saw so many things and walked over 16 miles!

The day started with breakfast at the hotel. They had a full buffet of eggs, pancakes, Chinese food (???), and a large assortment of pastries and other goodies. We were not expecting a feast for breakfast so not only was it a nice surprise, it was a nice way to kick off the day.

We were then introduced to our tour guide, Simon. He guided us through a walking tour to many of the big attractions. He talked fast, walked fast, and moved fast but we had a lot to do in a short amount of time so it was fine by us. We had to wear headsets to hear him so we definitely looked like awful tourists (my giant camera doesn’t help) but at least we all were tourists together!

The tour started at Kensington Gardens. We had gone through there yesterday but he took us through some areas we hadn’t seen yet. I still did not get to see the Peter Pan statue! The weather was a little chilly and overcast but made for a great walking experience because we stayed cool.

We went to Hyde Park next and saw the Princess Diana Memorial and took a short break. The memorial was great and the park was beautiful. There were so many different areas of it with some amazing flowers, ponds, and statues. learned about Speakers’ Corner where people gather on Sunday morning to say whatever they want. It originated because back in the day, it was an execution site and before they executed someone, that person got to say whatever they wanted to say. Apparently the term “one for the road” originated there too because people would get drunk the night before their execution and literally take one for their walk over. Morbid, but the more you know! 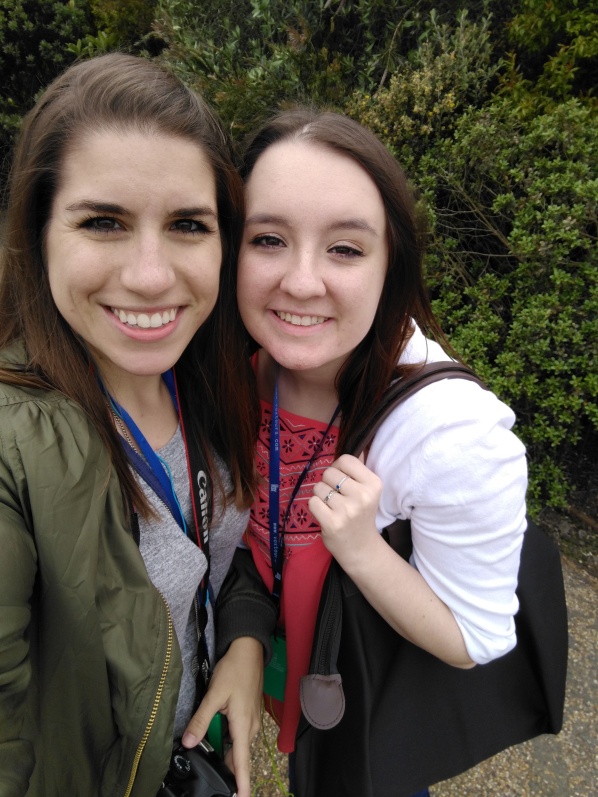 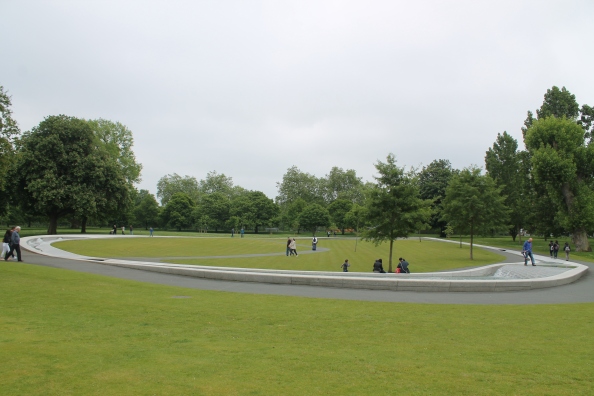 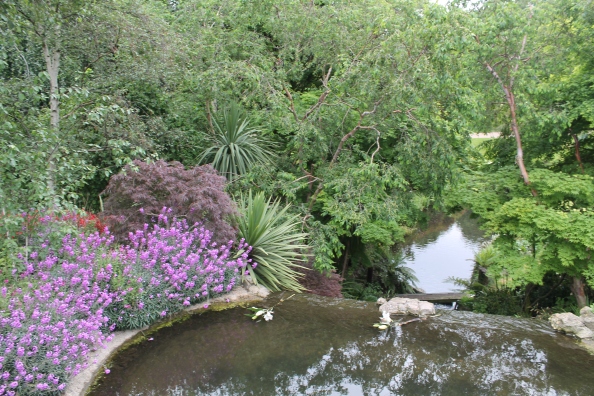 We walked through the rest of the park, through the Wellington Arch, and up Constitutional Hill on our way to Buckingham Palace.

Buckingham was CRAZY. They were having an event called ‘Vitality’ which is a series of races (think 5Ks, marathons, etc.) so not only were all of the tourists there, all of the racers and event items were there. Several parts of the roads were blocked off but we still got to see a lot. Because of the event though, there was no changing of the guards so we did not get to see that. We actually didn’t get to see the guards at all because the gate was crowed to probably 15 people deep! 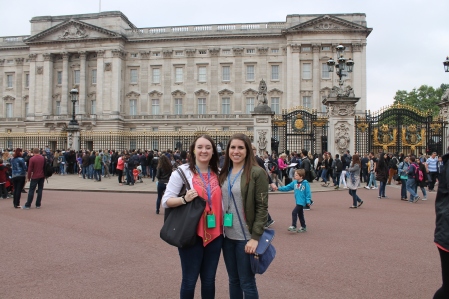 We headed up ‘The Mall’, passing the Clarence House (the official residence of Charles and Camilla), cutting through Green park, through Westminster on our way to Westminster Abbey. Westminster and Westminster Abbey were amazing. The buildings and greenery (and weather) were all so beautiful. By this point, everyone was getting pretty exhausted so we took another short break and managed to squeeze in our first group picture. 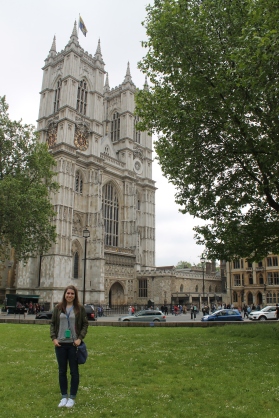 Big Ben was up next! Again, another very crowded spot so we took pictures mostly from a distance. It was a beautiful building! We also HAD to get the stereotypical red phone booth pictures. Duh. 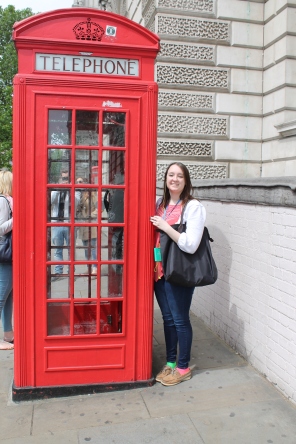 The tour’s last stop was a train ride over to the Tower of London and the Tower Bridge. We just took a few pictures before ending the tour with Simon. 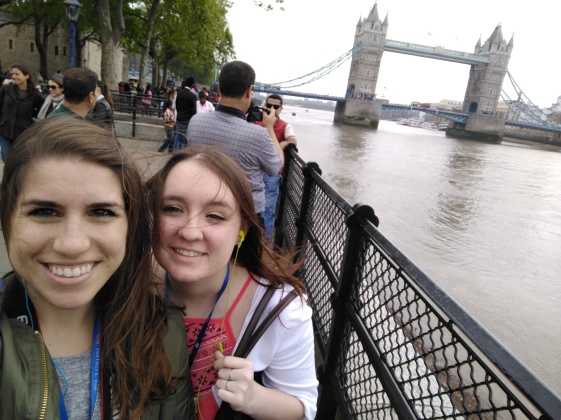 By this point, it was lunch time and we had the rest of the afternoon/evening to ourselves. We joined up with two of our friends from the night before, Greg and Justin (it is worth noting that like us, they like to keep moving and not waste time deciding what to do next), and took off down the River Thames toward the Borough’s Market. They came to London a few days in advance and had already seen a lot of the sites and were more familiar with getting around so it was nice to have them somewhat guiding the way. It turned out Borough’s Market is closed on Sundays but there were still a few places open so we had lunch at Whiskey Ginger and it was delicious.

We walked back up the river, crossing the London Bridge, and took the Tower of London tour. I wasn’t sure it would be much of anything but it was actually great (thanks Jessica for the recommendation). We had a short tour from a Yeomen Warder and he was quite the hoot. He definitely did not hold back with the cultural jokes and it was hilarious. We then toured the rest of it by ourselves and visited every tower there. It was a very impressive place! 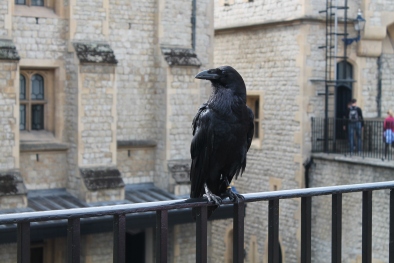 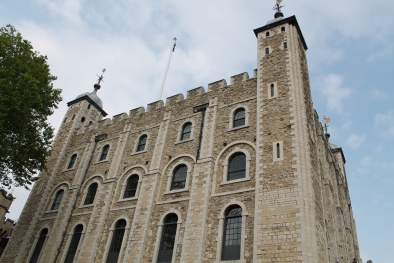 We really wanted to go on the London Eye so we headed there next. When we got there, the line was incredibly long. We asked someone at the front how long they had been waiting and they said over 45 minutes… and they weren’t actually close to getting ON the ride yet… so that, combined with the cost, gave us a good reason to skip it. I know it would have been awesome but because we skipped it we were able to go see so much more. We also got some extra pictures in front of Big Ben, so that was another bonus.

We crossed back over Westminster Bridge toward St. James’s Park (yes, they have it on the map as S apostrophe S… those Brits) to the Churchill War Room. Everything closes by 6pm on Sundays so we just got to walk by it but it was still cool. We walked down House Guards Road and Downey Street and got to see several of the government buildings and the Prime Minister’s official residence. We continued up Whitehall road (which I LOVED!) and ended up Trafalgar Square to the National Gallery. Again, we did not have time to go in as seeing everything in that museum would have taken hours. Plus, the guys had already visited it! From the outside, it puts the Houston museums to shame so I can only imagine the inside. 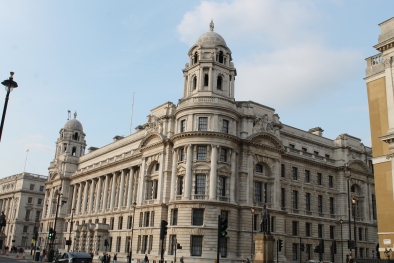 The last big stop on our list was Piccadilly Circus. It reminded me of Times Square in New York. It was busy, touristy, and just all-around crazy. We got our typical tourist gifts (re: my keychain) and took a ridiculous picture with a man in a UK-flag covered suit. 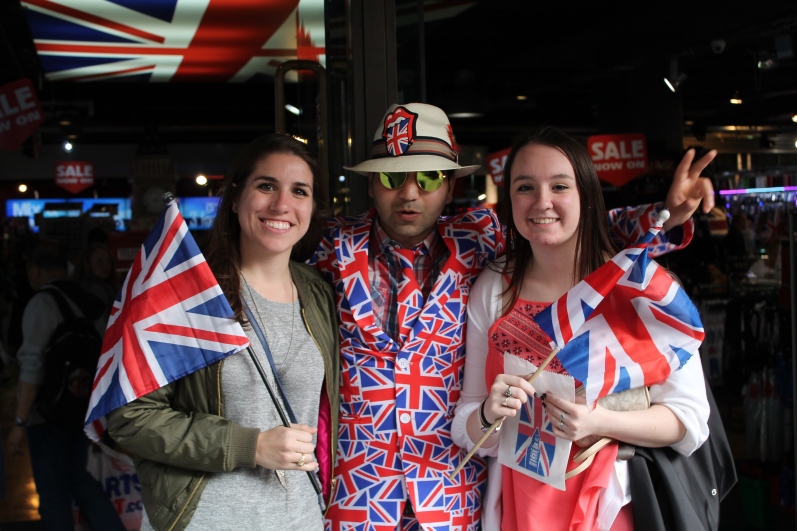 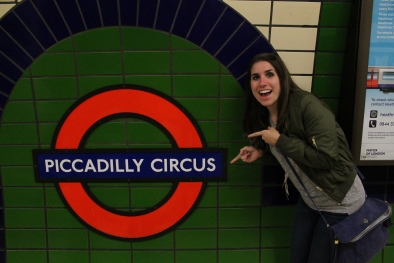 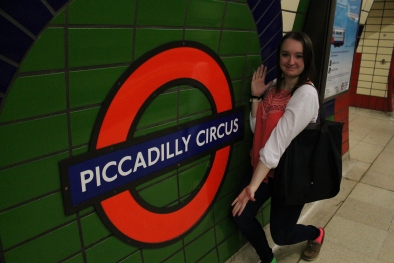 By this point we were starving, thirsty, and exhausted. We had walked so much and it was already 7pm. We took the train over to South Kensington because the guys recommended an amazing cookie place but, to no surprise, it was closed! We grabbed dinner at Comptoir Libanis, a Lebanese canteen. None of them had tried Lebanese food before but we all really enjoyed our meal. We were so thirsty and asking for refills that the waiter finally just brought us a pitcher (smart man). We asked to split the check though, which apparently is not a thing they do in Europe, and I don’t think he liked us after that. 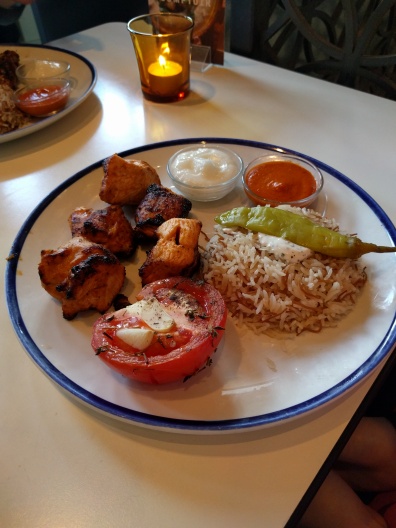 We had seen SO many waffle and ice cream shops on our walk that we decided after dinner that we had to try them. Just around the corner was a place called Wafflemeister and it was delicious. I had a waffle topped with chocolate gelato and dark chocolate syrup and oh my gosh it was AWESOME. I get the craze now. We were freezing and tired but we stood there and ate the heck out of those things! 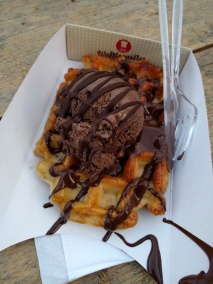 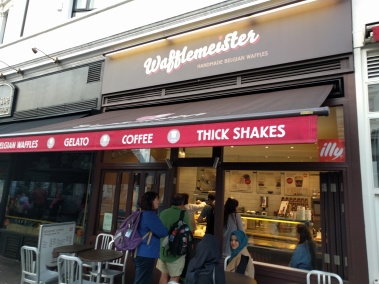 It was a great way to end the day! Tomorrow we depart for Dover, England at 6am via bus, take a ferry across the English Channel to Calais, France, and then travel by bus again to Paris! It is going to be a long travel day but hopefully we can get some rest on the bus. Plus, after the amount of walking we did today, it’ll be nice to just relax for a day!